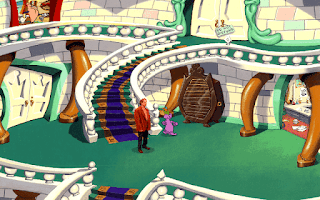 Genre: Adventure
Perspective: 3rd-person
Art: Live action
Gameplay: Graphic adventure, Puzzle elements
Narrative: Comedy
Published by: Virgin Interactive Entertainment
Developed by: Burst
Released: 1996
Platform: DOS
An undeservedly forgotten wonderful cartoon quest that uses a combination of animation and digitized video (the latter is represented by a digitized figure of the protagonist).
Play as animation artist Drew Blanc (played by renowned artist Christopher Lloyd). One evening, Drew, as always, sat in his cozy house and drew the characters of the next cartoon. But suddenly something happened (details - in the game), as a result of which a person got into ... the world of the cartoon! But not everything in this world is good: recently, power was seized by the Evil Count (!) And his henchmen, who commit an unheard-of atrocity - they change the cartoon world in the most rude way: bright colors disappear - only gray remains, and the cartoons themselves are from kind and cute creatures turn into negative characters! Of course, all this must be stopped, and it is not someone else who has to do it, but you in the role of Blanc.
In terms of interface and surroundings, this is a "classic" point and click quest with a third-person view. There are many NPCs, there are also many puzzles, sometimes solving them is not at all easy. The world of Toonstruck, in spite of the misfortune that happened to him, is an amazingly beautiful and kind world. Such splendor of graphics, sound and atmosphere has been achieved thanks to the long and hard work of the development team, to whom I would like to say a special thank you for creating such a miracle. Cartoon quests appeared both before and after Toonstruck, and many (and in an amicable way - the majority) became much more famous. But forgetting this wonderful game, in my opinion, is not worth it - if only because it is one of those about which one can say: "stands apart". And her comparisons with anything are really not very appropriate.
So if you love funny old cartoon quests - don't pass by Toonstruck. It is enough just to "open the page" - and a bright and unusual world will open before you in all its splendor - external and internal.
‹
›
Home
View web version