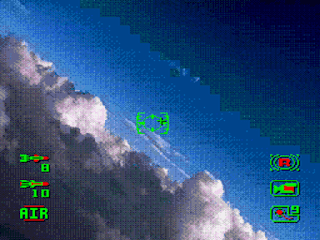 Genre: Action, Simulation
Art: Full Motion Video (FMV), Video backdrop
Published by: SEGA of America
Developed by: Code Monkeys Ltd.
Released: 1994
Platform: SEGA CD / Mega-CD
Tomcat Alley is an interactive video game in which you have to become the pilot of the American F-14 fighter and destroy enemies. The Americans, as always, associate all the problems with the USSR, in this case, due to the collapse of the Soviet Union, the CIS countries became so poor that they sold their weapons to the enemies of the United States. Those, in turn, decided to use the weapon as intended against the United States of America. You have to stop the growing threat. Videos in the game are made in full screen, which is quite rare for Sega Mega-CD and this technology is called TruVideo.
‹
›
Home
View web version