Tintin: Prisoners of the Sun (SNES) 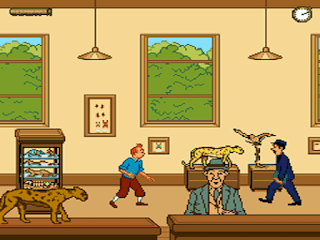 Genre: Action
Perspective: Side view
Gameplay: Platform
Published by: Infogrames Europe SA
Developed by: Infogrames Europe SA
Released: 1996
Platform: Super Nintendo (SNES)
The game is based on the popular comics by Georges Prosper Rémy, going back to the 30s of the last century. They were filmed several times, and realized in the form of an animated series. It's time for video games. This Super Nintendo version looks at a very high level. The graphics are implemented in a cartoon style. The main character is a young newspaper reporter Tintin, who, thanks to his profession, travels around the world and becomes a participant in exciting adventures. The whole game is based on overcoming various obstacles that can arise completely out of nowhere. The lack of combat does not spoil this work at all and it will not be possible to go through the game easily either, because it is pointless to run into endless obstacles and the limited time limit. The game very well conveys the spirit of adventure and expeditions to various countries and unknown places. If you are a lover of good adventure works, then you can check out this game, in which the chain of plot events is also perfectly conducted. Also, the continuation released for this Tintin in Tibet console also testifies to the quality and interestingness of this product.
‹
›
Home
View web version