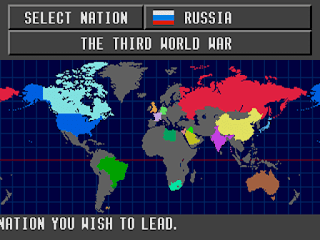 Genre: Simulation, Strategy / tactics
Perspective: Top-down
Visual: Isometric
Pacing: Turn-based
Gameplay: Managerial / business simulation
Published by: Extreme Entertainment Group
Developed by: Micronet Co.
Released: 1994
Platform: SEGA CD / Mega-CD
Your main task will be to prevent the Third World War. The game will take place either in the future or in an alternative time space, for example, during the Cold War. Each country will have its own strengths and weaknesses. There are limitations in terms of the development of society, technology and military power of the country.
The victory in the game can be won in two ways, gaining a military advantage or an economic one. To win a military victory, you must conquer 51 countries. It doesn't matter what and how.
In the game, you can choose one of 16 countries: the United States of America, Russia, Japan, Germany, China, France, Great Britain, India, Brazil, Canada, Australia, Iraq, Israel, Saudi Arabia, South Africa and Libya.
‹
›
Home
View web version