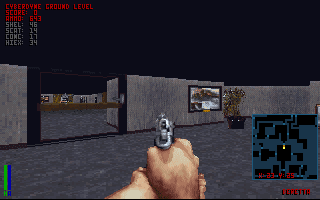 Genre: Action, FPS
Perspective: 1st-person
Gameplay: Shooter
Setting: Cyberpunk / dark sci-fi, Post-apocalyptic, Sci-fi / futuristic
Published by: Bethesda Softworks LLC
Developed by: Bethesda Softworks LLC
Released: 1993
Platform: DOS
The background of the game is as follows. 2029 year. Shortly before its surrender, the Skynet supercomputer dispatched a specially modified terminator known as Meta-Node in 1984. The goal is to bring the knowledge of the twenty-first century to the central computer of the Cyberdyne Systems corporation, thereby accelerating the formation of Skynet itself and ensuring the protection of the latter. To thwart these plans, a soldier was sent into the past, the role of which is to be played by the player in this first-person shooter.
So, the resident, having made a jump in time, finds himself on the first floor of the scientific laboratory, in the very storage where, presumably, the prototype of the protective suit was supposed to be. The suit was found, but it turns out that the time of the drop does not correspond to the planned one - the Cyberdyne building has already been occupied by Meta-Node, and its floors are reliably guarded by all kinds of Skynet products. The player, on whom hopes are pinned to save humanity, is armed with a Beretta pistol - to put it mildly, not the most suitable weapon for destroying cars. The floors of the complex also add complexity - they are huge and extremely confusing, so the words "introductory" and "preparatory" in relation to the levels are clearly out of place. Another surprise is the absence of the habitual "stumbling" over mountains of first-aid kits, armor plates and cartridges, as well as "trunks" - all this is in great deficit here. On top of that, health is not restored upon reaching the next level-level, and in order to defeat Meta-Node, you need to collect a special weapon - a plasma cannon, parts of which are scattered throughout the complex. But the situation is not at all as hopeless as it seems at first glance. In order to make it easier to navigate the labyrinthine corridors, the resident was given a map that, using coordinates, will indicate his location, it is also possible to return to previous floors up to the very first, pick up much-needed equipment that appears in the same places again. By the way, this number will not work with the components of the plasma gun, since it consists of unique parts, therefore, paired parts for its assembly will not work. One more point: with each visit to the floor, a special device will let you know whether the treasured part (s) has been found here or not.
A few words about the game's arsenal. The specimens presented in the game are distinguished by a fairly good elaboration, most of them have recognizable outlines (we are talking about real-life samples), unique special effects. True, it is unlikely that you will be able to shoot for your own pleasure due to the fact that it (weapon) and cartridges for it come across extremely rarely. The solution is to find the V-TEC plasma cannon as soon as possible, which is noticeably more powerful and does not require ammunition.
The quality of graphic performance is very heterogeneous: on the one hand, it is noticeable that the image lacks clarity, which makes it look kind of blurry, sloppy. It is quite possible that such "uniqueness" of the picture can complicate the search for weapons and ammunition, first-aid kits, access cards, because confusing them with some interior item and passing by is as easy as shelling pears; on the other hand, there are many interesting ideas that are quite capable of smoothing out the impression spoiled by not the best picture. For example, when aiming a weapon at an enemy, a fighter receives information about the type of enemy, his vitality, and can also survey him from all sides. That is, the terminators themselves are "flat", but on the mini-screen they appear in three-dimensional form ... I wonder why not the other way around? Another surprise (not the most pleasant one) is the behavior of bipedal terminators, which, even with very serious damage (when they are immobilized), are able to "recover" and subsequently self-heal. It is for this reason that a control shot, and sometimes a whole line, is required to finally calm them down. Infiltrators, as bullets are planted in them, gradually lose their human appearance, thereby exposing their metal endoskeletons. But they are not deprived of the opportunity to regenerate their bodies, and this ability does not extend to the human cover disfigured by bullets. Less noticeable little things include flashing lights, rotating fans, restless security cameras, and so on.
The sound in the game is generally good, with the exception of a couple of points: during shooting, it does not always match the animation, and, frankly, you cannot call it particularly pleasant to the ear either. Music in the main menu does not need comments - yes, this is it. The one that plays during the assignment is not bad; sorry, it is repeated too often.
And finally, a recommendation. First, Terminator: Rampage is worth familiarizing with fans of this series of games and films (a hint of familiar music and cinematic cinematics). It can also be recommended to those who are not obsessed with graphics, and, of course, to those critics who are not averse to gossip about the simplicity of games in this genre.
‹
›
Home
View web version