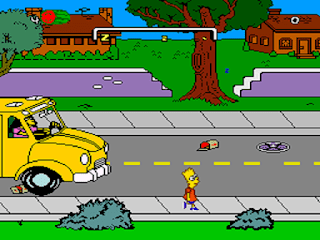 Genre: Action
Perspective: Side view, Top-down
Gameplay: Arcade, Platform, Shooter
Setting: Sci-fi / futuristic
Published by: Acclaim Entertainment
Developed by: Sculptured Software
Released: 1993
Platforms: Super Nintendo (SNES), SEGA Genesis / Mega Drive
Bart Simpson falls asleep when he was studying, and wakes up in a strange world where television and fairies roam the streets. To get out of that world he must look for the tasks (which are sheet papers) and duties among other things of Bart until he reaches reality.

The game is divided into two parts. The first is to walk down a street (probably Evergreen Terrace, although it refers to Windy World or Windy World) and find the sheets of your task while avoiding enemies such as living mailboxes or some characters from the series. Bart can pick up the items on his skateboard, which acts as a power booster and temporarily increases speed. In the game, Lisa Simpson is seen as Bart's enemy fairy, so she will transform him into a toad and we will not be able to attack. To get rid of this condition, we will have to go to an old lady who will give him a kiss and he will return to normality. Bart also has the ability to throw gum balloons to attack enemies.
Director Skinner will occasionally appear in the game and will try to dress Bart in his Sunday suit. If the player walks directly to Skinner, Bart will change his appearance, he will not be able to attack and will walk slower. However, the suit protects Bart and the attacks of the enemies will not hurt him. When we find a page of Bart's task in Windy World, the player must jump to it and Bart will "fall" on the page. Then, we must choose between two doors chosen at random, each with a different challenge. There we must take Bart to one of the two doors (if we do not choose any, Bart will automatically select the left door), and if we win the challenge, Bart can take the lost sheet.
Bart must walk the streets of Springfield and overthrow and destroy the army with fire breath and visual lasers. After being hit by a shrinking ray, Bart must fight "Homer Kong" and "Momthra".
A journey through Bart's bloodstream, where you must use an air bomb to explode germs. After collecting 5 atoms, when the page is visible, the player wins. This challenge is similar to Smiling Joe Fission (a character from the first season in the chapter "Homer's Oddysey").
Where Bart is attacked by Itchy and Scratchy, as well as various objects in the house (An oven that throws pieces of food on fire, the phone explodes, a photo of Marge drops her eyes, etc). It is the only challenge divided into two: first you must pass the first half and then do the second.
Where Bart flies over Springfield like a superhero. In addition to the clouds with radioactive gases, Bart must be careful with some enemies, such as Nelson Muntz on a hang glider or some clouds that release lightning, as well as missiles that go from bottom to top, always in groups, among others. Additionally, Bart receives soda bottles that fill his energy bar, provided by Apu who arrives on a magic carpet. There are also multiple bosses that make the game much more difficult, including:
Sherri and Terri: They will go in a hot air balloon throwing water bombs down and to the sides in order to damage Bart, it is advisable to stand on the hot air balloon and throw stones at him from there.
Barney Gumbley: He will be riding a pink elephant that spits peanuts down while Barney burps at Bart.
Waylon Smithers: he will be on a miniature airship throwing darts that until they have fired follow Bart, it is not necessary to defeat him, just dodge all his projectiles, as a curiosity, here Smithers has green hair, then Smithers will attack again But with faster and faster darts, it still doesn't need to be knocked down.
Mr. Mongomery Burns: he is the final boss of the minigame, he will be in his aviator suit in a red plane that has multiple machine guns that he fires while moving at high speed, I recommend to be constantly climbing and shoot when he is under Bartman.
Bart has to balance through some columns in the "Temple of Maggie".
These challenges can be played in any order, the pages received will go from being 1 to 8 depending on the order in which they were recovered. Once we lose or recover a leaf, we will return to Bart's room at night, and a counter will tell us how many leaves we recovered and how many we are missing, while Bart continues snoring. If we only need a challenge to pass, the two doors will be the same color, no matter which one we enter. The game ends when Bart dies (causing him to wake up from sleep) from losing all his Z's (Windy World will be covered by a white mist, suggesting to Bart that he is about to wake up) and can take damage once more and complete all challenges . The first thing we see is a photo of Bart with some scribbled sheets if we have not recovered any in the dream or if we recover them all the sheets have the words "The End" written on them. Depending on the number of challenges we have passed and the score we will be awarded a grade. Next he is going to show us a scene with Bart's work placed on the refrigerator.
Depending on the rating we have obtained, the reaction of the Simpson family will be different, in the worst case we would get an "F", making the whole family upset unless the player gets a better rating. If one manages to pass all the challenges and get the highest grade, Bart's bedroom will go from night to day, Bart wakes up on his own and the ending shows. The challenges or mini-games give the game an arcade style. However, many of the challenges can be classified as platform, except for the Bartman and Bartzilla games that could be classified as shooting.
‹
›
Home
View web version