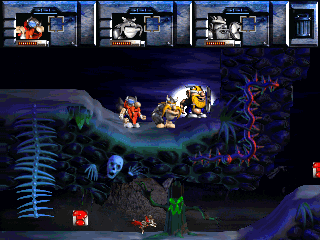 Genre: Action, Puzzle
Perspective: Side view
Visual: 2D scrolling
Gameplay: Platform
Setting: Fantasy, Sci-fi / futuristic
Narrative: Comedy
Published by: Interplay Entertainment Corp.
Developed by: Blizzard Entertainment Inc.
Released: 1997
Platforms: DOS, Super Nintendo (SNES)
No sooner had the three Viking friends recovered from the troubles caused to them by the space villain and part-time director of the zoo Tomator in the first part of the game, when another misfortune befell them. Painfully familiar flash of teleportation - and three brave warriors again find themselves many miles and years from their home. However, they do not intend to humbly wait for their fate and, having resolutely disassembled the robot guard, escape from their prison. In an unknown place, in an unknown time, hopelessly far from their homeland, the Vikings, with your help, must find their way back. But be extremely careful - behind everything that happens again, the intrigues of the tyrant-Tomator are visible, who clearly did not learn a lesson from the last meeting with the brave warriors. 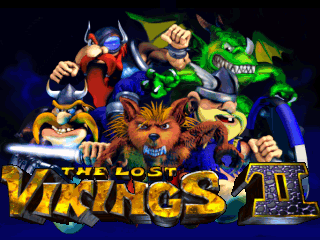 As you can easily understand, the concept of the game has not undergone any significant changes since the first part. The main task facing you is to lead three friends to the exit through levels packed with traps and enemies. As before, the main feature of the game is a lot of ingenious riddles that can be solved only by knowing the strengths and weaknesses of each of your three wards by heart and competently acting with them in the right order. Is that the "exit" now - not a door with the inscription "Exit", but a device for teleportation to a new place (however, "device" is too rough a word; along the adventure you will be rescued by old gypsies, and novice sorceresses, and forest shamans , not to mention the classic witch on a broom). And, of course, you have to pay for any help. If you want to go further - if you please bring the components for the successful operation of witchcraft.
It is noteworthy that the Vikings themselves did not waste time and learned something new. To successfully defeat the villainous kidnapper Tomator, you will also have to master the abilities they have acquired to perfection. So, the swift-footed Eric has mastered the double jump technique, and also swims under water no worse than a refueling diver. The good-natured Olaf, apparently, has properly studied his huge shield and now can not only block enemy attacks with it, but also use the magic powers hidden in it to reduce himself to a tiny size and get into previously inaccessible holes. Also, an obese Viking, following in Eric's footsteps, acquired the ability to jump low, albeit in a very original way. The mighty Baleog, having borrowed a mechanical arm from a security robot, also found the necessary use for it, skillfully clinging to conveniently located ledges and thus making long jumps. In addition, the three friends now have loyal allies - the werewolf Fang (Fang) and the green dragon Scorch (Scorch), designed to bring even more variety to the game. And although you will still not have more than three characters at a time under your control at the same time, the idea itself deserves unconditional approval.
The level structure also migrated from the previous part quite successfully - all the same passwords for each new stage without the ability to save your progress before the next dangerous moment. It is unlikely, however, that this will become a serious obstacle for you - the levels are not very large, and their repeated passage will not give you the slightest unpleasant experience. As for the geography of the upcoming journey, the Vikings will again have to visit several thematic zones, including the Middle Ages, a pirate ship, the jungle and, of course, the future, so boredom from the monotony of landscapes is not expected.
But, no matter how sad it is, a few words have to be said about the sad. Throwing aside the hand-drawn graphics familiar from the first part, The Lost Vikings 2 frightens off with some overly emphasized gloom and inanimateness. Inseparable companions are still amusingly arguing and making fun of each other, Tomator's speeches in intermediate video scenes also cheer up, but this is clearly not enough to keep the quality bar at the high level to which its magnificent first part raised. And while the puzzles are still challenging and the dangers many and varied, the Norse by Norsewest vibe has lost something that cannot be returned, adding a couple of new characters and a few unusual abilities. Music is also a subject of grief. It remains only to sadly ask the question where the cheerful, catchy and pleasant melodies of the original game have gone.
However, the aforementioned shortcomings in this case can and should be forgiven, because this is the same beloved The Lost Vikings, which easily makes us sit at the monitor for many and many hours in an attempt to find a way out of yet another dead end. With each new stage, the riddles become more complicated, and the transition to the next level will be guaranteed to bring you incomparable pride in your own remarkable skills. And this time Tomato will not get away from the well-deserved punishment!
‹
›
Home
View web version