The Adventures of Rad Gravity (NES) 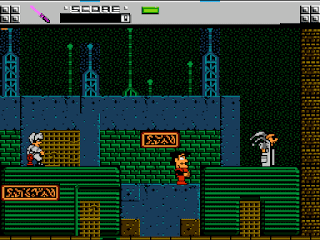 Genre: Action
Perspective: Platform
Setting: Sci-fi / futuristic
Published by: Activision
Developed by: Interplay Productions
Released: 1990
Platform: Nintendo (NES)
Starting the game for the first time, you immediately begin to feel a kind of cyberpunk. And this shade of the game does not fit well with the comical appearance of the protagonist.
Before us is a well-made platformer, with a good atmosphere and good graphics. The plot is as follows: a mad scientist broke the world peace with his inventions, and now something needs to be done. Who will help everyone? Rad Gravity, on stage!
Red, of course, is not a superhero, he is just a Hero, but always with a capital letter! Guided by the tips and parting words of his on-board computer, he will have to get into the enemy's rear, crushing the heads of the infidels, and put things in order there, returning peace and tranquility to the inhabitants of the planet.
In the center of the gameplay is a journey across the galaxy and showdowns with many enemies in different corners of it. Many types of weapons and devices that can be found in the levels come to the aid of our hero. Correctly selected equipment is the key to successful completion of the levels. Although the game implies non-linearity, it is still better to play it according to the instructions of the on-board assistant. One interesting trick can be done in the game: if you sit down or jump up in time, the enemies will kill each other.
‹
›
Home
View web version