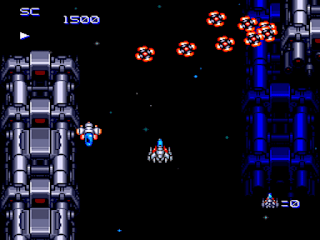 Genre: Action
Perspective: Top-down
Visual: 2D scrolling
Gameplay: Arcade, Shooter
Setting: Sci-fi / futuristic
Published by: NEC Technologies
Developed by: Inter State Co.
Released: 1991
Platform: TurboGrafx-16 (TG-16)
The first of those games made with the Blazing Lazers engine. It is played in a completely different way.
The weapon upgrade system has been simplified, now there are only basic forms. The weapons themselves are different, the general only is the classic spread "3 bullets forward, 2 back", which, by the way, first appeared in the Star Soldier game (which hints at Compile's involvement in the creation of that game). There is only one useless weapon - a flamethrower. When you take the power up of the main weapon, protection from three hits is given. If they hit the plane, some of the pumping is removed. You can restore pumping and protection by taking a power up of the same color. They decided to leave the ingenious power-up, and rightly so. Strolling was removed, also correct.
Now this is not an easy game at all, even a difficult one, but the last level is a real hell. Hell, into which refits with previous bosses were stuck, and they did it very meanly - in front of one difficult boss, which is normally killed only by a green power up, a whole bunch of power ups of all colors, except for green, are flying. Well, they did not forget to add enemies there, of course. You will have to suffer, in general. The level design is very good. Almost each of them is played in a different way thanks to some kind of their own chip. Bosses are even better, although there is not enough hatred for them on refs. It is recommended to play, but also to be prepared for difficulties.
‹
›
Home
View web version