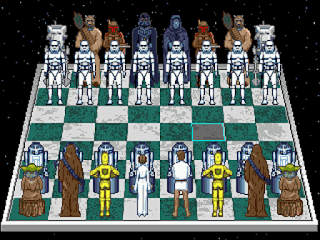 Genre: Strategy / tactics
Gameplay: Board game, Chess
Setting: Sci-fi / futuristic
Published by: Mindscape
Developed by: Software Toolworks
Released: 1994
Platforms: SEGA CD / Mega-CD, Windows 3.1
Star Wars Chess, as the name suggests, is a Star Wars-style chess game. That is, each of the chess pieces corresponds to one of the heroes, as in LEGO Chess, released in 1998 for PC. In the game, everything remains the same, no new rules, this is still a logic board turn-based game. To make it more fun for us to play, there are funny and even brutal battles of figures that show us when two characters collide. If you get tired of the pseudo 3D picture in the game, you can switch to traditional mode and play there.
As always, the confrontation takes place between Princess Leia and Darth Vader.
‹
›
Home
View web version