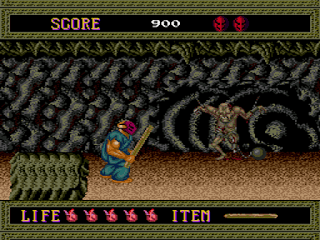 Genre: Action
Perspective: Side view
Visual: 2D scrolling
Gameplay: Arcade, Beat 'em up / brawler
Narrative: Horror
Published by: NEC Technologies
Developed by: Namco Limited
Released: 1990
Platform: TurboGrafx / PC Engine
There was a place called West Mansion, but those who know the legend will say that this place is better known as "Splatterhouse". The scientist-parapsychologist Dr. West lived in this house and he did some experiments all the time in his laboratory. They say he could even create some monstrous creatures. But these are all legends. Although they also need to be checked. Which is what the two did - young scientists Rick and his girlfriend Jennifer. But in the house something terrible happened to them - Jennifer was kidnapped, and Rick was covered in blood, not himself, and even with a mask on his face. The Terror Mask (I would also add: hockey) by the way gives some ancient power, which Rick used to find his girlfriend. The game is great and worth a try.
‹
›
Home
View web version