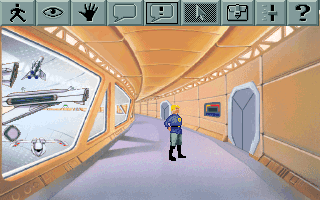 Genre: Adventure
Perspective: Side view
Visual: Fixed / flip-screen
Gameplay: Graphic adventure, Puzzle elements
Interface: Point and select
Setting: Sci-fi / futuristic
Narrative: Comedy
Published by: Sierra On-Line
Developed by: Dynamix
Released: 1993
Platform: DOS
Roger Wilco, a kind young man, in the previous parts more than once bravely saved the Universe when it was in danger. He always dreamed of becoming a Captain, having his own ship, flying across the endless expanses of the Universe. And he couldn't do it. But now the failures are over.
It all starts with the fact that Roger Wilco, while still a cadet at the StarCon Star Academy, gnaws at the granite of science, fights sleep at lectures, forces himself to sit down at textbooks. And we can add that he is not alone: his classmates, a certain Gordon Freemer and Albert Einstein, also "excelled" in their studies. However, under your careful guidance, Roger Wilco will pass the exams, and these two gentlemen, alas, will not. All the delights of student life await you with Roger Wilco, you manage to be late for a couple, you will be forced to wash the floor, take a written exam, and, with the proper skill, even cheat from your classmates. However, if you take up this business, you should remember that it is better to cheat from excellent students.
Becoming Captain, Roger Wilco, will receive the Eureka spacecraft at his disposal. Now Roger is determined to set off to explore new worlds. And even if his ship is just a "garbage bin", who cares in the end? Roger Wilco has three subordinates. Droole is an officer in arms and other nonsense who was literally sent into exile to Eureka. Why? Ask him about it yourself. Beauty Flo - Category 4 Airborne Engineer, Liaison Officer. She has green skin and is married for the 14th time. Clifford, or as his friends call him, simply "Cliffy", is Eureka's chief engineer. It is he who makes sure that everything works, that everything turns on and off. Two things are particularly noteworthy. First, how he does it (if you've seen the movie "Armageddon" with Bruce Willis in the title role, then you probably remember the Russian cosmonaut, Lev Andropov, who repaired everything with a wrench), and second, how he repairs. Personally, I was delighted with the hammer in Clifford's toolbox, designed to work with Eureka's delicate and delicate electronic systems.
As a Captain, you will have to do routine work (not every day to perform great feats) and, together with the crew, go to a local bar for entertainment. By the way, in the same bar you can face Rick Deckard (the Android Hunter from Blade Runner with Harrison Ford in the title role).
And while Roger Wilco, along with his fearless crew, will perform routine work, something strange and dark will be happening in remote areas. Although Confederate patrols are regular, not everyone is interested in catching the famous smugglers who pollute the planet with toxic emissions. In addition, some Colonies have stopped communicating altogether. In one word - there is a lot of work for the Captain.
The player is waiting for endless references to the gems of world cinema science fiction ("Aliens", "Predator"), as well as a frank parody of the Star Trek series. You can even see the famous fight between Ben Kenobi and Darth Vader from Star Wars.
The principles of gameplay in this part have not changed. Whoever played the previous parts will immediately understand what's what.
The graphics in the game are very pleasant, the work of the artists is worthy of the loudest applause. The backgrounds and animation were especially successful. Be sure to pay attention to the beautiful landscapes of the planets Kiz Urazgubi and Trakus.
Space Quest V: The Next Mutation is both a very cute plot, and a rather funny parody of all science fiction, and beautiful graphics for those times.
Recommended for all fans of this genre.
P.S. King of Rock'n'roll Elvis Presley in the Space Quest V universe is very much alive and well. Play and see for yourself.
‹
›
Home
View web version