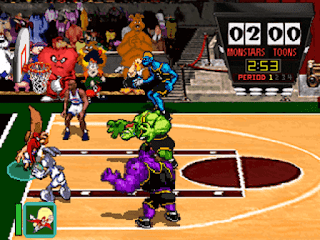 Genre: Sports
Perspective: 3rd-person, Side view
Sport: Basketball
Published by: Acclaim Entertainment
Developed by: Sculptured Software
Released: 1996
Platform: PlayStation (PSX, PS1)
Space Jam is a good basketball for a novice gamer. Characters from Warner Bros. We became the protagonists in this game. Simple and fairly convenient controls, cartoon graphics, and a lot of gags - all this makes the game attractive for the player who first encountered basketball simulators for the PlayStation system. However, Space Jam hasn't become the Tunes game it is based on. This is essentially ordinary basketball, in which periods of play merge into a single storyline. Graphics and sound of this level could well have been implemented on a 16-bit game console. The plot is too simple and quickly exhausts the options for the development of the action - it becomes monotonous and repeatable. But again, novice players will play this game with pleasure, but fans of serial games such as NBA Live, or NBA ShootOut are unlikely. For more experienced players, a high pace of play, short intervals between periods, and an acute shortage of time may be attractive. Try to get the best out of it.
‹
›
Home
View web version