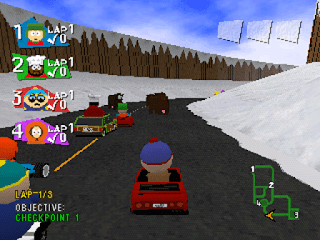 Genre: Racing / driving
Perspective: Behind view
Gameplay: Arcade
Vehicular: Automobile, Track racing, Vehicle simulator
Published by: Acclaim Entertainment
Developed by: Tantalus Interactive Pty.
Released: 2000
Platform: PlayStation (PSX, PS1)
South Park Rally is a circuit-based arcade race featuring a dozen popular characters from the acclaimed TV series, including four toddlers and oddballs like a police officer, pimp chief and alien creatures. Two-thirds of the characters are secret and will become available only after completing the entire race or finding special bonuses.
In total, the game has two main modes: arcade and championship mode. The only differences are in the number of available tracks and the order in which they are used. The rules of the arcade race apply to the championship as well, and they are more than simple. You drive along the ring road, marking key points from time to time until a certain period of time has elapsed. Along the way, you have to dodge crazy cows, jumping hares, electric trains and school buses. In addition to agility and decent speed, your allies in reaching first place are special bonuses scattered around the perimeter of the entire race. Each of the bonuses has its own function (sometimes completely useless) and can be used a number of times.
‹
›
Home
View web version