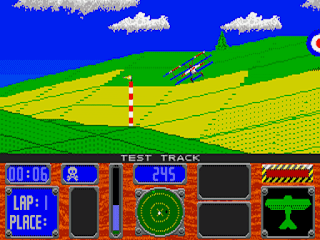 Genre: Action, Racing / driving
Perspective: Behind view
Gameplay: Shooter
Vehicular: Flight / aviation
Published by: SEGA of America
Developed by: Hammond & Leyland
Released: 1993
Platform: SEGA CD / Mega-CD
The Racing Aces game is an arcade racing game, not just a simple one on cars on race tracks, but in the air on various planes. You choose one of the planes, and take part in races, so as not to get lost and not go astray, the track is highlighted in a separate color. You can shoot and shoot down enemy planes that are ahead of you. The game also has a large number of bonuses in the form of balloons: lives, weapons, acceleration, etc. The game is made in vector 3D graphics.
‹
›
Home
View web version