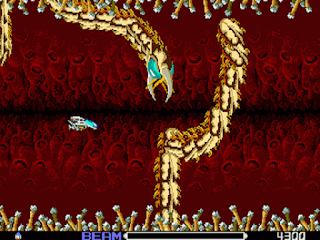 Genre: Action
Perspective: Side view
Gameplay: Arcade, Shooter
Setting: Sci-fi / futuristic
Published by: Hudson Soft Company
Developed by: Irem Corp.
Released: 1988
Platform: TurboGrafx / PC Engine
The R-Type II title was also used for an edition on PC Engine, but this is not the sequel, but the second half of the levels of the first R-Type, which for this console was divided into two standalone titles.

The evil Bydo empire has returned, this time with a more ferocious ruler, called Womb, who after taking over some exoplanets is intent on conquering the Milky Way and other galaxies with the weapons at his disposal. But also the spaceship that will oppose it is no less: the R-9 battleship has been updated (now called R-9C War-Head), superpowered with weapons, including new support Forces and above all a new devastating Beam-charged laser.

The game consists of six levels, all of which must be completed a second time if you want to see the true ending. Here too, as in the previous title, there are no hit points, so a life will be lost in case of collision with enemies, with their bullets and with the walls.
The battle between Good and Evil winds up to the clash with Womb, whose appearance is similar to that of a huge crab. When he appears, it is revealed that he has captured four land spacecraft; these, after their release, will go to support the R-9C in the fight against the boss. Although male, Womb is endowed with a placenta (not for nothing his name corresponds to the English word for "Uterus"), where there are two clones of his predecessor emperor - that is Bydo, the final boss of R-Type - at the embryonic stage: destroying these, the R-9C will at the same time bring about the end of Womb. Chain explosions follow, but the R-9C manages to escape along with three other spacecraft.
‹
›
Home
View web version