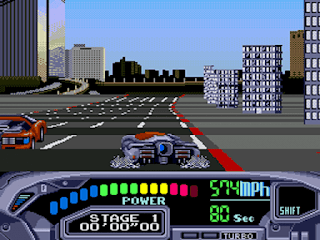 Genre: Action, Racing / driving
Perspective: Behind view
Vehicular: Automobile
Setting: Sci-fi / futuristic
Published by: SEGA of America
Developed by: Hertz Co.
Released: 1993
Platform: SEGA Genesis / Mega Drive
One game from the popular OutRun series that initially had absolutely nothing to do with OutRun. Initially, the game was made as a standalone project for a Mega-CD / Sega CD called Cyber Road. But for some reason, it was later decided to transfer the game to the standard SEGA Genesis / Mega Drive and give the game a new name Junker's High under which the Beta version of the game was released. But later, apparently to increase sales, the game was renamed Out Run 2019. Although, as we can see, there are not many similarities between the games. You are driving a rocket-powered machine of the future. Which is able to accelerate the car to unprecedented speeds in the version of the game for the American audience, this speed is 1097 km/h, for the European 682 km/h, and for the Japanese only 341 km/h. Your goal is to drive a certain segment of the track for a certain period of time. Try to stay within the track and not crash. The main feature of the game is that you can choose one of the possible paths. There are only four stages in the game, and each one is more difficult than the previous one.
‹
›
Home
View web version