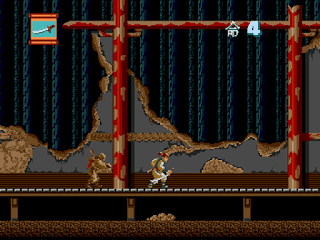 Genre: Action
Perspective: Side view
Pacing: Real-time
Gameplay: Platform
Interface: Direct control
Setting: Fantasy
Published by: NEC Technologies
Developed by: Irem Corp.
Released: 1990
Platform: TurboGrafx / PC Engine
Ninja Spirit is a side-scrolling action game that made a splash in the video game world for its precise graphics and quality gameplay. You play as a ninja named Moonlight, who fights desperately to avenge his father's death and uncover the secret of his birth.
You have the choice between the original arcade mode and the life indicator PC-Engine game mode. You have four types of weapons at your disposal: kusarigama, katana, shurikens and bombs, with which you defeat enemies on your way. Use bonus items and change weapons to gain an advantage in battle. To masterfully complete all seven levels, take into account the attacks of opponents and the characteristics of your weapons.
‹
›
Home
View web version