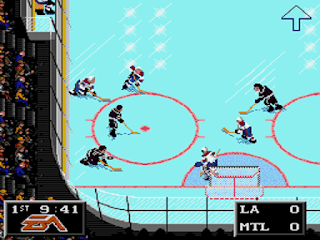 Genre: Sports
Perspective: Top-down
Visual: 2D scrolling
Interface: Direct control
Sport: Hockey
Published by: Electronic Arts
Developed by: Electronic Arts Canada, High Score Productions
Released: 1993
Platforms: SEGA CD / Mega-CD, SEGA Genesis / Mega Drive
NHL '94 is one of the best ice hockey sports simulators of the time. The game had a simple setup of teams and relative realism, but still it was not easy for beginners to score the puck into the goal. The game was made on a new game engine with a new non-standard view of the playing field. There are 26 real hockey teams in the game, made up of two NHL and NHLPA leagues. The game was licensed by the National Hockey League and NHL Players Association. There are also many different goodies in the game that may be liked by fans of this sport. Unlike the Sega Genesis / Mega Drive version of NHL 94, the Sega CD version of the game has a good soundtrack and FMV videos.
‹
›
Home
View web version