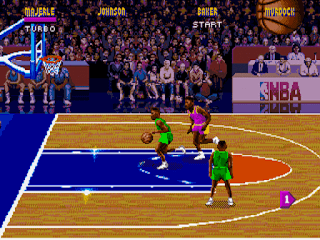 Genre: Action, Sports
Perspective: Side view
Visual: 2D scrolling
Gameplay: Arcade
Interface: Direct control
Sport: Basketball
Published by: Acclaim Entertainment
Developed by: Midway Manufacturing Company
Released: 1994
Platforms: SEGA CD / Mega-CD, SEGA Genesis / Mega Drive
The game is revolutionary, and brought a lot of new things to this genre. Almost all the characters in the game are real, they have an NBA license. The game takes place in Arch Rivals mode, that is, 2 on 2. Since this game is an arcade, the game has a minimum number of rules, which means that you can push with impunity and do much more. Also in the game you can break the laws of physics, jump very high, create a fireball, etc. The game has a large number of Easter eggs and secrets. The game supports multiplayer up to 4 players.
‹
›
Home
View web version