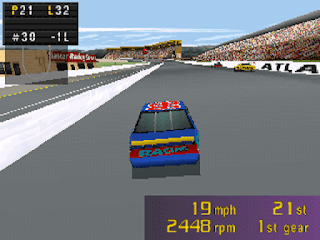 Genre: Racing / driving, Simulation, Sports
Perspective: 1st-person, Behind view
Vehicular: Automobile, Track racing, Vehicle simulator
Published by: Sierra On-Line
Developed by: Papyrus Design Group
Released: 1996
Platforms: PlayStation (PSX, PS1), DOS
Developers of video games, namely in the genre of auto racing, do not want to leave “Formula 1” without competition for anything. NASCAR Racing'96 is undoubtedly one of the successful attempts of this kind. This is a fairly conscientious simulation in the famous American class of cars - NASCAR. Perhaps its most striking feature is that you have to test yourself on 16 official tracks, plus artificially created tracks, plus their night versions - a total record number of tracks for auto games on PlayStation (now this is no longer a record, because . the game Tommi Makinen Rally implements 130 tracks). The tracks are not complicated in configuration (traditionally, they are usually oval) and, perhaps, the main danger is to crash into the fence.
‹
›
Home
View web version