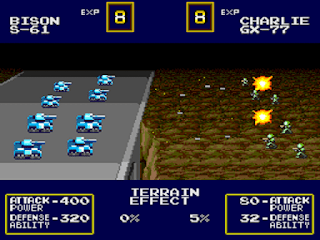 Genre: Strategy / tactics
Perspective: Top-down
Pacing: Turn-based
Setting: Sci-fi / futuristic
Published by: NEC Technologies
Developed by: Hudson Soft Company
Released: 1990
Platform: TurboGrafx / PC Engine
21 century. The earth has become too small for the ever-increasing human needs. The moon promised tremendous benefits in case of development. The most powerful countries on Earth have declared their claims to lunar wealth. Not without military action. And so, on April 6, 2089, the Axis of Evil carries out a decisive attack on the moon, and captures most of it. All dissenters were killed or imprisoned. The army took over all the factories of the moon, and the evil Axis Empire began SAM (Supreme Atomic Missile) project is a super-nuclear missile designed to destroy the Earth. Well, now everything is clear. Your task is to free all the prisoners on the Moon, and prevent the insidious plan to destroy planet Earth. The game is a turn-based strategy game. You have infantry and heavy equipment at your disposal. Each unit can be used 1 time per turn. In battles, combat units gain experience, so do not attack experienced tanks with inexperienced infantry, this is my advice. Otherwise, the tactics and strategy of the game are clear. Conspiracy theorists may find fault with the shadows and the image of the Earth in the screensaver (which is really oversized for a view from the moon).
‹
›
Home
View web version