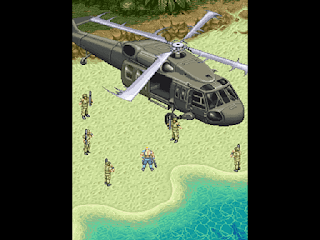 Genre: Action
Perspective: Top-down
Visual: 2D scrolling
Gameplay: Arcade, Shooter
Narrative: War
Published by: Capcom Co.
Developed by: Capcom Co.
Released: 1990
Platforms: Arcade Machine, SEGA Genesis / Mega Drive
His name is Joseph Gibson, nicknamed Mercs, formerly a green beret, good at various types of weapons, currently a mercenary soldier sent to a hot spot to suppress the rebellion against the United States. He is helped by: Howard Powell - the founder of the mercenary anti-terrorist unit, Thomas Clarke - the mechanic, available only in a multiplayer game. To complete his mission, the main character uses the irreplaceable M16 with a built-in grenade launcher, plus everything has the possibility of upgrading it, so that the enemies have no chance of winning. The graphics in the game are excellent, everything is solid and detailed. The game resembles Contra Force on NES in its theme, only the view here is from above. A large number of enemies keep you on your toes throughout the game, while maintaining interest in it.
‹
›
Home
View web version