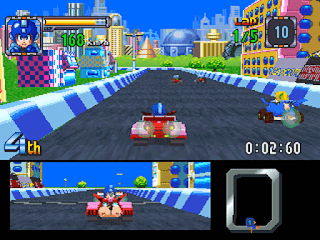 Genre: Racing / driving
Perspective: Behind view
Art: Anime / manga
Gameplay: Arcade
Vehicular: Automobile, Track racing, Vehicle simulator
Published by: Capcom Co.
Developed by: Capcom Co.
Released: 1997
Platform: PlayStation (PSX, PS1)
The game consists of three different modes: One player - "Grand Prix Mode", "Time Trial Mode" and multiplayer "Versus Mode". Grand Prix Mode contains a total of eight tracks, while Time Trial Mode contains twelve tracks. This game features 12 playable characters from the classic Mega Man series, including Mega Man himself, Roll, Protomen, Bass, Duo, Dr. Wiley, as well as some robot masters: Guts Man, Ice Man, Quick Man, Shadow Man, Napalm Man and Spring Man. Each of the characters has different abilities that can be used to attack other players during the race. The pressure gauge on the left side of the screen will recharge multiple times and allow other players to attack when fired. For example, Mega Man has the ability to shoot small projectiles from his vehicle. When the weapon gauge is full, the player can unleash a much larger and more devastating explosion.
All tracks are littered with hazards and other obstacles that range from giant street cones to robots in helmets. Instead of getting around them, players are encouraged to make contact with them. Running through the destruction of ten of these hazards with a weapon will give the player a special point. These elements have various effects, such as a shield that is given to the player or disarming other players. Winning races in "Grand Prix Mode" allows the player to select a specific part of the car such as the engine, fender, wheel, or body from the owner of the track, allowing you to tune in to repair and change the appearance of the selected character's car.
‹
›
Home
View web version