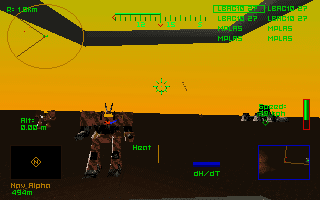 Genre: Action, Simulation
Perspective: 1st-person, Behind view
Interface: Direct control
Vehicular: Mecha / giant robot, Vehicular combat
Setting: Sci-fi / futuristic
Narrative: War
Published by: Activision
Developed by: Activision
Released: 1996
Platform: DOS
If you have played MechWarrior and MechWarrior 2 - then you have not played here - so play.
Now you are a mercenary who works for money, and not on the instructions of the clan. And from here follows the first essential thing - you have to pay for everything. To install a gun - pay, outweigh the laser from hand to torso - pay, repairs - also pay. And more. Sometimes it's easier to sell. If you want a new fur - you have to work (but you can have several). The weapon was torn off in battle along with the hand - again expenses - there was nothing to hang it there.
The second essential thing is weapons, they are of two types - clan (denoted by the letter C) and ordinary. The second can be bought, the first - only to pick up on the battlefield (how many missions were replayed to get an extra pair of lasers ...), but the first is lighter, more powerful and heats up less. And getting the clan fur is a dream.
The game mechanics are at the level, the damage model works perfectly, and this should be used, it is easier to fight three or four cripples (and they move more interestingly) than with one corpse and two or three serviceable mechs. Reverse and a laser salvo on the leg is a thing! In a space mission, you have to be careful with jet engines - otherwise you can fly away. You can hire a partner - the pilot of the flyer. A good help is to finish off the wounded or to distract the enemy. True, they are different in skill and price.
The plot is linear and consists of key campaigns that combine several missions, between which you can complete two or three single missions. Campaigns, of course, are paid more solidly. Non-linearity (or rather, a choice of two options) is only in one place - almost at the very end, where they give the task to steal the Kodiak: you can complete the task, or you can leave it to yourself and ride around in the most powerful clan mech. It all depends only on your conscience.
‹
›
Home
View web version