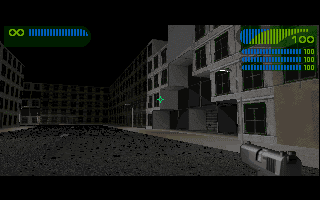 Genre: Action, FPS
Perspective: 1st-person
Gameplay: Shooter
Narrative: Horror
Published by: Ocean Software Ltd.
Developed by: Ocean Software Ltd.
Released: 1997
Platform: DOS
One fine day in 1968, Mr. George Romero shot his first motion picture about the living dead, which he christened, only specifying the time of the incident. Romero popularized rotten freaks, from that moment zombies became not only characters in voodoo myths, but also an element of mass culture. The cyber entertainment industry picked up interest in the subject as soon as the necessary technical equipment was available - one of, if not the first, the game was released in 1983 on the Apple II system. But for a long time, no one touched on the most traditional zombie conflict, namely, the confrontation of a loner with hordes of undead.
Last Rites is a game of an unoriginal genre, even a three-letter word is indicated in the column. The attitude towards shooters after Doom left the office of Carmack and Romero (already another) was quite biased - they were called doom-clones. So, LR is a typical clone of id's game. It's sprite-based, plotless, and bloody.
Instead of Mars, here is an empty city filled with crowds of hungry, half-decayed people. Instead of a space infantryman - as many as four earthly infantrymen. One is subordinate to the player, the other three are also subordinate to him, but controlled by artificial intelligence. With this brave team, the path to victory is cut, usually through the mountains of enemies.
Last Rites pretty well implements the idea of ​​one (four) against hordes of the dead - usually zombies at the same level of the cloud. This is despite the fact that they do not respawn. This does not make it scary at all, because the ammunition indicator for the Uzi shows a three-digit number, and you can also extract a shotgun, a rocket launcher, a flamethrower and a plasma cannon from the same pants. And the controls smell like an arcade, the hero is too playful and active and can run around mobile corpses, generously showering the floor with shell casings.
A zombie is a low-resolution sprite that can skillfully disguise itself on the horizon, merging with nature. Several types of them usually live on one map. There are also traditional ones, with peeled skin and a exposed skeleton, there are also better preserved ones, for example, visitors to the supermarket throwing hammers, and hamburger consumers, whose fat layer was not disturbed by a deadly infection.
The levels in Last Rites are really extensive, but this is not so important, since the authors skimped on the color palette, and therefore everything is either gray or brown, but they often used the clone stamp tool. Models of rolling weapons have no textures at all. And finally - the resolution is 320x200, although not, on the heroic loading screens it is still twice as large.
A shooter far behind the times. Next to the latest DOS games like Blood or Redneck Rampage, it looks like a black and white copy of another copy of the same. Tedious shooting of ghouls, backed up by monotonous levels and antique graphics. 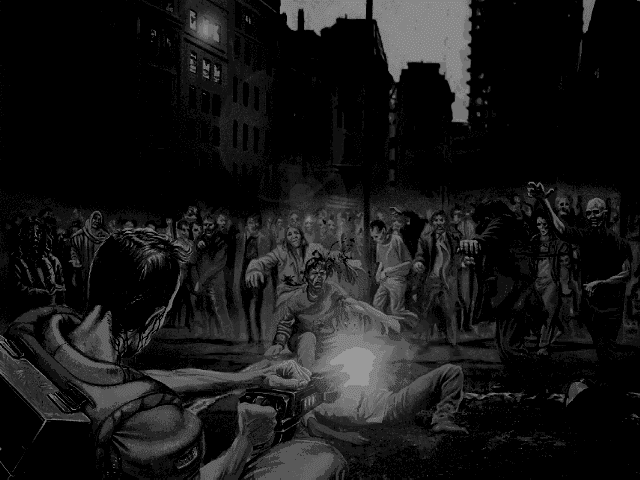