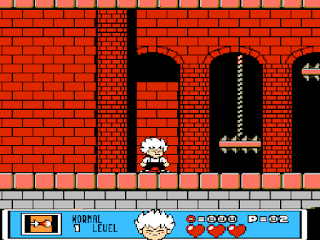 Genre: Action
Perspective: Side view
Visual: 2D scrolling
Gameplay: Platform
Setting: Fantasy
Narrative: Comedy
Published by: Konami Corporation
Developed by: Team Murata Keikaku
Released: 1990
Platform: Nintendo (NES)
There is no plot in the game as such. The main character is the young son of Dracula, awakened from sleep by the evil demon Garamoth, who devastated Dracula's castle. And now young Dracula must find the villain and take revenge on him.
The game is a parody of the Castlevania series also released by Konami, a kind of children's version of the famous horror game. In game terms, "Boku Dracula-kun" is a typical 2D side-scrolling platformer. The main character of the game is Alucard (Alucard, Dracula, written in reverse order), the son of Count Dracula, travels through the platform levels of the game and deals with numerous opponents: zombies, Frankenstein's monsters, bats, witches and ghosts. The levels of the game and the opponents are designed in a comic parody style.
In total, the game consists of nine levels: Dracula's castle, clouds, arctic, New York, desert, space, etc. At the end of each of them, the player will have a meeting with the main enemy of the level - the boss. To confront enemies, Alucard is able to shoot energy charges at them. In addition, after completing the first five stages, the young vampire gains a new special skill, it can be a special type of weapon, for example, homing energy charges, the ability to transform into a bat or freeze his opponents.
Enemies killed with special weapons leave behind coins, on which, after passing each level, you can play mini-games, for the successful completion of which the player receives additional lives.
‹
›
Home
View web version