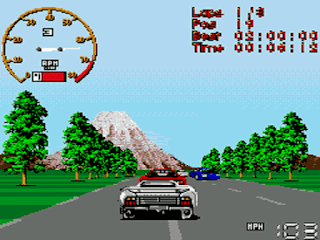 Genre: Racing / driving
Perspective: Behind view
Gameplay: Arcade
Vehicular: Automobile, Street racing
Published by: JVC Musical Industries
Developed by: Core Design Ltd.
Released: 1993
Platform: SEGA CD / Mega-CD
In the game you have to take control of the sports car of the same name. You have to take part in races around the world, there will be 32 tracks in total. With different road conditions. The gameplay is slightly similar to the game Lotus Turbo. You also have to repair your car, before the start of the race, you can choose which music track will play in the game. The game also has a Track editor in which you can build your own track for racing.
‹
›
Home
View web version