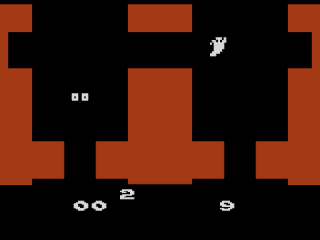 Genre: Action, Adventure
Perspective: Top-down
Visual: 2D scrolling
Gameplay: Arcade
Narrative: Horror
Published by: Atari
Developed by: Atari
Released: 1981
Platform: Atari 2600
The protagonist of the game (represents two eyes, since the rest of his body is in darkness) Haunted House finds himself in the abandoned house of the late Zachary Graves. While there, he must collect three pieces of the urn and try to get out of it alive.

The whole game takes place in a house with three floors and a basement. The player has the ability to collect items such as a key that opens all doors, a scepter that drives away enemies or parts of an urn. You can only carry one item at a time.
There are three types of opponents in the game - bats, tarantulas and the ghost of Mr. Graves. If one of them touches the character nine times, he dies. The game ends if the player finds all the pieces of the urn and leaves the house alive.
‹
›
Home
View web version