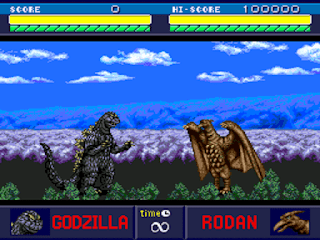 Genre: Action
Perspective: Side view
Gameplay: Fighting
Setting: Sci-fi / futuristic
Published by: Toho Co.
Developed by: Hudson Soft Company
Released: 1993
Platform: TurboGrafx / PC Engine
You control the world famous prehistoric sea monster - Godzilla. You will need to kill all new opponents. The defeated opponents can then be played. And it's also interesting that at different levels, Godzilla looks different. In the first battle, she was in 1955, in the next - in 1964, and so until 1992.
To be honest, the game is not impressive. Yes, it is clear that the size of Godzilla imposes a frame on the dynamism of the fighting game, but sometimes you want a variety of blows and faster response to button presses. In general, for amateurs.
‹
›
Home
View web version