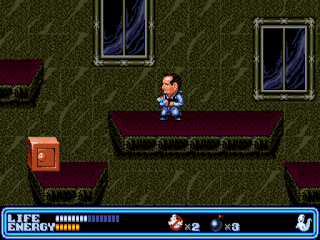 Genre: Action
Perspective: Side view
Visual: 2D scrolling
Gameplay: Platform, Shooter
Narrative: Horror
Published by: SEGA of America
Developed by: Compile, SEGA Enterprises Ltd.
Released: 1990
Platforms: SEGA Genesis / Mega Drive
The game is based on the popular movie "Ghostbusters". In the game you need one of three characters to clear various rooms from hordes of ghosts and various monsters. To do this, you have something like a blaster and a bomb. You also need to collect money, because you are not some kind of charitable foundation that would work for free. I recommend to all fans of ghost Ghostbusters.

While your character is on the stairs, he is invulnerable (not susceptible to enemy attacks). But, unfortunately, you cannot shoot in this position.