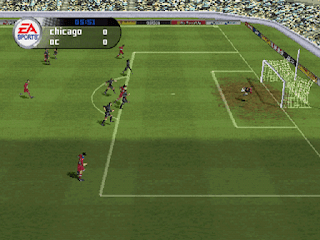 Genre: Sports
Perspective: Bird's-eye view
Visual: 2D scrolling
Interface: Direct control, Multiple units/characters control
Sport: Football (European) / Soccer
Published by: Electronic Arts
Developed by: Software Creations Ltd.
Released: 2001
Platform: PlayStation (PSX, PS1)
In this game, they decided to rework the passing system. For the first time on a PS1, it is necessary to determine the force of the impact with the duration of the press. Fatigue also appeared: now it will not be possible to sprint across the entire field. In addition, the ball no longer sticks to the player - it is now possible to take away the ball that the unwary player has let go too far away from him.
‹
›
Home
View web version