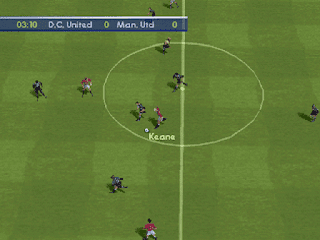 Genre: Sports
Perspective: 3rd-person, Bird's-eye view
Interface: Direct control, Multiple units/characters control
Sport: Football (European) / Soccer
Published by: Electronic Arts
Developed by: Electronic Arts Canada, Software Creations Ltd.
Released: 2000
Platform: PlayStation (PSX, PS1)
The FIFA series on the PSX was smoothly approaching its peak. FIFA 2001 launched a new graphics engine. In this game, life is in full swing not only on the field, but also around it. Spectators, coaches and substitutes react violently to what is happening, clouds move across the sky, the illumination changes depending on the time of day ... The fans in the stands no longer resemble frozen scenery - they jump up from their seats, shout words of support to their team and boo their rivals ... The footballers look like they are alive. Each of them is similar to its real prototype, not only externally, but also in terms of plasticity of movements and even in style of play. Thanks to the new skeletal animation system, athletes can express emotions through gestures and facial expressions. Goodbye robots - long live the naturalness of movement!
‹
›
Home
View web version