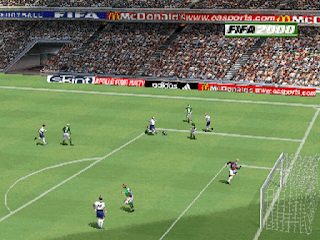 Genre: Sports
Perspective: Bird's-eye view
Visual: 2D scrolling
Interface: Direct control, Multiple units/characters control
Sport: Football (European) / Soccer
Published by: Electronic Arts
Developed by: Electronic Arts Canada
Released: 1999
Platform: PlayStation (PSX, PS1)
FIFA 2000 is bigger, better, and above all, much more realistic. The game features the strongest national teams of the world - the national teams of Brazil, Spain, England, Germany, Italy, France, Scotland, Holland, Sweden, Belgium, Korea, Norway, Portugal, Denmark, Greece, Israel and Turkey. All the strongest clubs are also represented in the game. In FIFA 2000, you can play for one of forty historic teams. If you want to play for England in 1966 against Italy in 1999, no one forbids you. The graphics in the game have also been improved over previous versions. Animations are now much smoother, in particular, it can be seen in elements such as tackles, player collisions and many others. EA has incorporated over 80,000 words and phrases into the game by English football commentators John Motson, Chris Waddle and Mark Lawrenson. Add to this the multiplayer game of eight players at the same time.
‹
›
Home
View web version