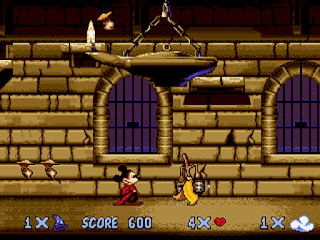 Genre: Action
Perspective: Side view
Visual: 2D scrolling
Gameplay: Platform
Published by: SEGA of America
Developed by: Infogrames Europe SA
Released: 1991
Platform: SEGA Genesis / Mega Drive
The game is based on the musical animated film from 1940, where Mickey appears as a sorcerer's apprentice. We will visit a magic castle, the era of dinosaurs, hell and other interesting places, collecting magic notes along the way. The controls can get in the way of enjoying pleasant graphics and a well-transferred atmosphere: the mouse moves sluggishly, the animation plays for a long time. To kill the enemy by landing on his head, you need to squeeze "down". The music in the game ranges from high-quality adaptations of classic tunes in 16-bit format to their transformation into a complete cacophony. The game is quite short (only 4 levels), but contains many unique prize zones.
‹
›
Home
View web version