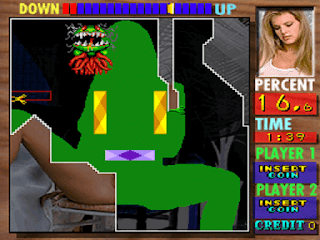 Genre: Action, Puzzle
Perspective: Top-down
Visual: Fixed / flip-screen
Gameplay: Arcade
Interface: Direct control
Narrative: Adult
Published by: Comad
Developed by: Comad
Released: 1997
Platform: Arcade Machine
An adult variant - one of the many published by the company - of the 1981 Taito classic, "Qix" (and later, of Kaneko's "Gal Panic"), in which the player must "color" sections of the background in order to reveal the scanned photo of a naked woman in a provocative position.
Like Quix and his followers, Fantasia's screens are populated by a variety of enemies to avoid or destroy.
In addition to the enemies, the player must also face the challenge against time.
‹
›
Home
View web version