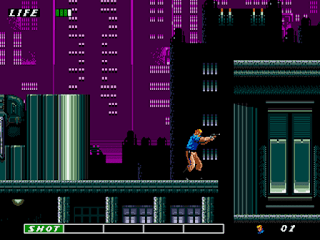 Genre: Action
Perspective: Side view
Visual: 2D scrolling
Gameplay: Arcade, Platform
Setting: Sci-fi / futuristic
Published by: SEGA of America
Developed by: SEGA Enterprises Ltd.
Released: 1990
Platform: SEGA Genesis / Mega Drive
The city is in danger and you, as a police officer named Duke Oda, must clear the city of crime. But, having solved this problem, a new one appears. The mysterious and high-tech organization E.V.E. Seeks to take over the city. At the beginning of the game, Duke Oda is only armed with a pistol and is very vulnerable. But at the end of the second level, he finds the Ice Combat Suit. The suit acts as armor. It is also now possible to improve weapons. And the suit has a jetpack that allows you to make short time flights. The energy reserve in the knapsack restores itself.
‹
›
Home
View web version