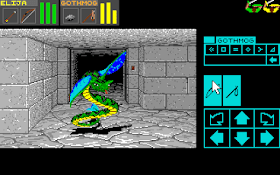 Genre: Role-Playing (RPG)
Perspective: 1st-person
Pacing: Real-time
Gameplay: Puzzle elements
Setting: Fantasy
Published by: FTL Games
Developed by: FTL Games
Released: 1992
Platform: DOS
Dungeon Master is considered the "mother of all RPGs" in the history of computer games, as many of the foundations of the genre were laid here in the form to which we are now accustomed. The game is quite difficult, it is unlikely that you will be able to just sit down and start playing it. First you need to understand the control features and the magic system, which is very specific and not intuitively understandable. Therefore, I will describe the non-obvious points. 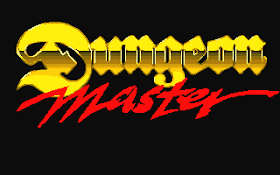 There are several types of strike for each weapon. The blows have different strength and speed, as well as a number of other less important indicators. As a rule, the hit presented at the top in the selection menu is the weakest and fastest. But not always.
The magic system is based on four groups of elements, and its essence boils down to the following. To throw a spell or concoct a potion, you need to compose a set of runes, of which the first determines the strength of the spell, and the subsequent ones - its actual content. To find out which runes a particular spell consists of, you need to find and read the corresponding scroll (or information on the specified website).
The party can be made up of four characters, but it is wiser to take only two and make them generalists in all specialties: fighter, ninja, priest and magician. There is nothing for four to do there - there are not enough monsters, and therefore exp, in the game.
The game can be too difficult or even impassable if you don't develop your characters. This, unfortunately, needs to be done with a trivial and boring workout, stopping in a safe place.
In all other respects, there are almost no difficulties: we go along the intricate underground corridors, bring down monsters, solve interesting riddles, look for hiding places.
‹
›
Home
View web version