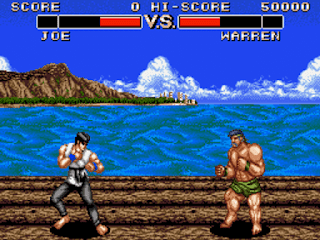 Genre: Action
Perspective: Side view
Visual: 2D scrolling
Art: Anime / manga
Gameplay: Fighting
Narrative: Martial arts
Published by: Kaneko USA
Developed by: System Vision
Released: 1992
Platform: SEGA Genesis / Mega Drive
The most ordinary fighting game, in the game you play the role of Joe. There are only eight fighters in the game with us. Each of the fighters has their own moves and super hits, as it should be in fighting games. Each of the characters belongs to one of the countries. The game is quite short and in the single player mode you have no right to choose who you want to play for. There is also a two-player mode. The game is similar to Street Fighter but doesn't even come close to it.
‹
›
Home
View web version