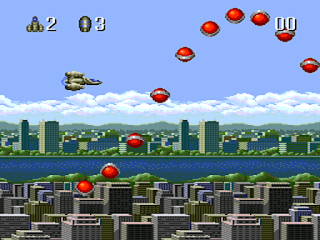 Genre: Action
Perspective: Side view
Gameplay: Shooter
Setting: Sci-fi / futuristic
Published by: Natsume
Developed by: Studio Ducks, ZAP Corporation
Released: 1992
Platform: TurboGrafx-16 (TG-16)
Scientists have spotted something like a comet, which, according to calculations, should have flown very close to the Earth, and they sent a research apparatus to search for information about the comet. But the device did not give signals, and the comet changed direction and is now moving to Earth! In this situation, the UN decides to make the comet crash into the Moon and not the Earth (they will do so with the help of rockets). Then they sent an expedition to the moon to find out what kind of comet it was, and discovered alien war machines!
A very colorful and dynamic shooting game. Everything from enemies to levels is drawn with love. The music is very good, and what else is needed to complete it.
‹
›
Home
View web version