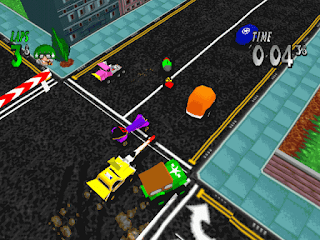 Genre: Action, Racing / driving
Perspective: Top-down
Gameplay: Arcade
Published by: Mindscape
Developed by: Supersonic Software Ltd.
Released: 1996
Platform: PlayStation (PSX, PS1)
Get ready to take part in a series of crazy events, where you will fight against seven opponents for the title of the greatest racer of all time. In Dare Devil Derby 3D, there are about 30 different tracks with different levels of difficulty. Competitions take place in canyons, on highways, on city streets, on snow-covered mountain peaks, in the rain, under water and high in the sky. The tracks are distinguished by a large number of obstacles - here there are moving bridges, and steep cliffs, and intersections, and sharp turns, and long climbs. You will have to compete with seven serious opponents such as Dr. Diabolical, Oswald and Blastem, who drive a variety of vehicles, from a dredger and dump truck to a racing car. There are six different levels for the single player mode: “Grand Prix” - a series of 10 races, where the player must come to the finish line in the top three in order to be able to race on the next track; “World Series” - a season of 10 races, where points are awarded depending on the player's position at the finish of the race, the final results are summed up at the end of the season; “Championship mode” - a tournament where you compete with one opponent on different tracks; “Knockout” - race with several opponents for elimination; “One on One” - race with each of the seven characters against the clock; “Speed Trial” - one lap along the track with one goal - to break the speed record for this track.
‹
›
Home
View web version