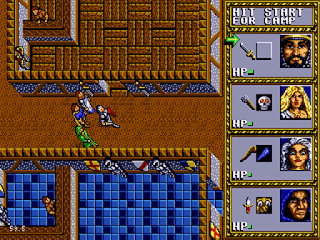 Genre: Role-Playing (RPG)
Perspective: Bird's-eye view
Pacing: Turn-based
Setting: Fantasy
Published by: SEGA of America
Developed by: Westwood Associates
Released: 1992
Platform: SEGA Genesis / Mega Drive
An evil army of goblins laid siege to the castle of Duke Hector Barrik, their forces were clearly not equal and the Goblins began to win. The Duke was already beginning to think about surrender. But then the ground trembled underfoot, and everyone was sucked into darkness. When they wake up, they understand that they, together with the castle, have been transported to a new world, to some kind of universe that they do not understand. And the goblins disappeared somewhere. Hector Barrick instructs four warriors to go on reconnaissance and find out what kind of new universe has risen before them, and find new allies. But it turns out that they, together with the castle, are surrounded by impenetrable mountains. We have to play for these four warriors. In addition to allies, we will also find many enemies. Everything is done in the style of the Dungeons & Dragons game, there are magic and spells. Also from the innovations there are 3D labyrinths, in which it is very easy to get lost and die. Nice and addictive RPG based on the famous RPG by Gary Gygax.
‹
›
Home
View web version