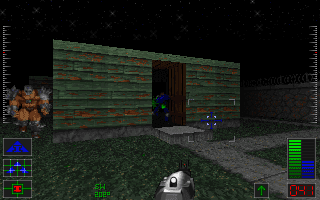 Genre: Action, FPS
Perspective: 1st-person
Gameplay: Shooter, Stealth
Setting: Sci-fi / futuristic
Published by: Strategic Simulations
Developed by: Raven Software Corporation
Released: 1994
Platform: DOS
Havoc, one of thousands of "cybernetic clones", suddenly realizes that he is fighting on the wrong side and begins to take revenge. Despite the plot, which fits into three simple sentences (by the way, I managed to fit it into one), the game has some interesting innovations. For example Mouselook. If I'm not mistaken, it is used here for the first time in the history of shooters, although it is made a little differently than in modern games. Also, the interface is more reminiscent of RPG games than shooters: here you can access the inventory and its other elements using the mouse. However, the game went unnoticed at one time, even a good graphics engine (called STEAM), which can be compared with DOOM, and the presence of side missions did not help the Cyclones get out of the shadow of the Heretic and Hexen.
‹
›
Home
View web version