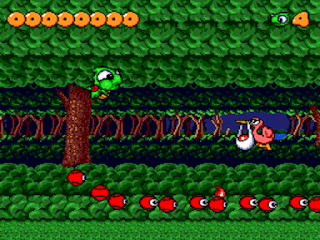 Genre: Action
Perspective: Side view
Art: Anime / manga
Gameplay: Shooter
Setting: Fantasy
Published by: Naxat Soft
Developed by: Naxat Soft
Released: 1991
Platform: TurboGrafx / PC Engine
Shooter with a dragon in the lead role. Your princess has been offended and you must punish the offender. And he has to fly through many levels before reaching this goal. Colorful levels and the dragon itself will delight you throughout the game. Several types of weapons will help to deal with enemies. Sometimes there are so many things on the screen (bullets, bonuses, enemies) that the loss of life cannot be avoided. Despite the "childish" design, the game has a high level of difficulty, noted by many players.
‹
›
Home
View web version