Conquest of the Crystal Palace (NES) 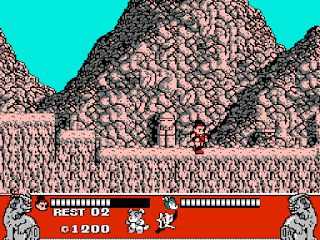 Genre: Action
Perspective: Side view
Visual: 2D scrolling
Gameplay: Arcade, Platform
Published by: Asmik Corp. of America
Developed by: Quest Corporation
Released: 1990
Platform: Nintendo (NES)
Our story begins with the existence of the Crystal Palace, which was a prosperous kingdom, but once the evil spirit of war, Zaras, appeared and brought destruction to this peaceful land. The people left their homes after Infection and his henchmen took over the Palace, turning it into a labyrinth with many dangers.
We control Farron, a historical hero who must enter the Crystal Palace and destroy the forces of evil in order to restore peace and justice. In each of the five levels of the game, you will need to fight different enemies in very different areas, and, finally, defeat the main villain boss at the end. At first, the hero only has a simple sword, but during the game it will be possible to find or buy additional weapons as well. If we are in serious trouble, you can call for help from a friend - the dog Zap, he will start jumping and harm opponents, which will give you a chance to survive. Also, during the game, you can meet Kim's shops, here we can buy various items, including additional lives, gain health and arm ourselves with more powerful weapons. To purchase items, we need money, they are given to us for the enemies defeated in the levels.
The plot of the game is its weakest point, and the story is yet another, for the hundredth time, when we need to save our kingdom, captured by evil enemies. It would not hurt, of course, a more original story. Everything else in the game is great. Excellent music absolutely does not encourage you to dodge the sound, on the contrary - you want to listen to it. The graphics aren't exactly the limit, but they are very cool here, which is worth at least a few scrolling backgrounds! The gameplay and control are all 10 points out of 10 possible, it is impossible to tear yourself away from the game, so everything here is dynamic, exciting and convenient.
‹
›
Home
View web version