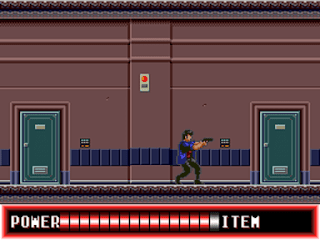 Genre: Action
Perspective: Side view
Visual: 2D scrolling
Art: Anime / manga
Gameplay: Shooter
Published by: Sun Electronics Corp.
Developed by: Sun Electronics Corp.
Released: 1990
Platform: TurboGrafx / PC Engine
This game is based on the manga by Tsukasa Hojo. You play as Ryo Saeba, a certain warrior named "City Hunter" who owns a variety of combat techniques and weapons. In the game, you need to deal with the crime that brazenly staggers in the city. There will be 3 scenarios to choose from. It is difficult to pass them quickly, but it is possible. In general, there are so many intricate moves in the game where you need to get keys that you can easily get lost. As for the keys here is a puzzle - find the key, to find it you need to go to the n-th floor and free the girl who will give you the key, then go to the beginning, they will also give you a key and a pass ... and so on. The graphics in the game, like the music, are of high quality, the details of the world are well drawn, but the hero's movements are sometimes not very smooth.
‹
›
Home
View web version