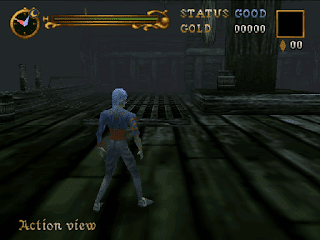 Genre: Action
Perspective: Behind view
Gameplay: Platform, Puzzle elements
Interface: Direct control
Setting: Fantasy
Published by: Konami of America
Developed by: Konami Computer Entertainment Kobe
Released: 1999
Platform: Nintendo 64 (N64)
Castlevania: Legacy of Darkness came out almost immediately after Castlevania 64 and is essentially an add-on to its predecessor. But how! The game does not start in a silent forest, but on an abandoned ship. Before that, we are shown an interesting prologue, in which the main character, the werewolf Corneille, returns to his native village and finds it burned to the ground. Spawn of darkness roam everywhere, and Corneille's sister, Ada, has been kidnapped. The young man rushes in search of the girl, and the road eventually leads him to Dracula's castle. And it is there that the decisive battle between good and evil will take place.
Playing for Corneille is generally similar to playing for Reinhardt and Carrie from Castlevania 64, but there are plenty of differences. The werewolf's main weapon is an energy wave that hits a decent distance. For melee combat, Corneille uses sharp claws. Secondary weapons can now be upgraded to destructive power, but that's not all! The hero can turn into a wolf! However, for being in Beast Form, you will spend crystals. And human form cannot be taken until the crystals run out. The stages to overcome are basically the same as in Castlevania 64, although some locations are not available to Corneille. For example, Castle Center. But such magnificent places as Art Tower, Outer Wall, Tower of Ruins appear. Well, of course, no one canceled the exciting running around the maze garden. Only now your task will not be to catch up with Malus. Corneille will lead a little boy named Henry out of the maze. And the sinister gardener with the chainsaw will still haunt you. Many of the familiar locations have undergone significant changes, such as Forest of Silence, Tower of Science, Duel Tower, Tower of Execution, Clock Tower, and I must say that the changes have been made for the better. In this regard, puzzles with keys and levers have changed.
The musical accompaniment throughout the game will caress your ears with charming dark motives. Masahiko Kimura has produced an ingenious soundtrack! There is no dialogue voice acting in Legacy of Darkness, but this in no way affects the quality of the game. And there is something magical about these silent scenes that creates a unique and unforgettable atmosphere. Many people in Castlevania 64 were annoyed by the camera and character controls. In Legacy of Darkness, these elements have been significantly improved and improved. You can even fix the camera behind the hero's back by holding down the corresponding button, and thus move. In some places, it helps a lot.
After the end of the game, a small surprise awaits you in the form of an alternative passage for the young knight Henry, whom you saved while playing Cornel. This alternative mode is a separate story, the time of which takes place in parallel with the adventures of Reinhard Schneider and Carrie Fernandez. While the descendants of the Belmonts and Belnades perform their heroic feat, the Church instructs Henry to find six children kidnapped by Dracula's henchmen. Boys and girls are cleverly hidden in locations and it is sometimes very difficult to find them. As you save the children, you will unlock all the new bonuses in the form of hard mode, new alternative playthroughs for Reinhard and Carrie, as well as new costumes for them and Corneille. Yes, in Legacy of Darkness, you can also play as 64 characters you love from Castlevania!
Unfortunately, both games on the Nintendo 64 are still not favored by many fans of the series. Basically, these are die-hard 2D-Castlevania supporters who have a lot to lose. But even more modern and technically advanced Lament of Innocence and Curse of Darkness are in many ways inferior to their 3D predecessors. To summarize, we can safely say that Legacy of Darkness is one of the most entertaining and atmospheric games in the Castlevania series.
‹
›
Home
View web version