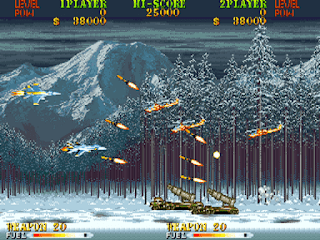 Genre: Action
Perspective: Side view
Gameplay: Arcade, Shooter
Published by: Capcom Co.
Developed by: Capcom Co.
Released: 1990
Platform: Arcade Machine
The game belongs to the shooting / fly genre. Here you can choose from 4 aircraft of the American Air Force: tomcat, hornet, intruder, each of which has its own unique arsenal: air-to-air, air-to-ground missiles, and it is given to choose the type of firepower, each has its own, and the variety depends on the stage. The game takes place in open spaces and in urban environments, which complicates maneuvering. Bosses are also found different from huge bombers, which need to shoot off the engine, to a giant ground robot. In general, the game is quite entertaining.
‹
›
Home
View web version