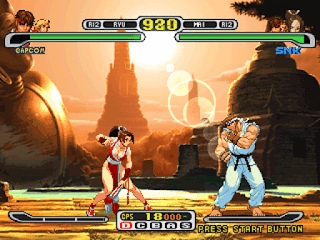 Genre: Action
Perspective: Side view
Visual: 2D scrolling
Art: Anime / manga
Gameplay: Arcade, Fighting
Narrative: Martial arts
Published by: Capcom Entertainment
Developed by: Capcom Production Studio 1
Released: 2002
Platform: PlayStation (PSX, PS1)
Capcom vs. SNK: Millennium Fight 2000 Pro port of Dreamcast game adjusted for PlayStation capabilities. The original game was created for arcade machines. It should be admitted that the PlayStation port suffers from certain shortcomings, therefore, for the most part, the reviews from fans were negative, which does not detract from the fact that such a game was released on the PlayStation that was actually retired and the possibilities that this product provides to us. By and large, this kind of product is the dream of a hardcore fighting game fan. The game features over 30 fighters from the Street Fighter series (Capcom: Ryu, Guile, Chun Li, Dan Hibiki), King of Fighters (SNK: Terry, Joe Higashi), Samurai Shodown (SNK), and Morrigan (Capcom: Darkstalkers ). The heroes of the game are divided into two camps: Capcom and SNK, two giants of the game industry with tremendous experience in creating fighting games. The main highlight of Capcom Vs. SNK: Millennium Fight 2000 Pro are team fights. The selection of fighters is based on the rating scale set by the developer. Initially, it is assumed that a number of characters are relatively weak, and of the four available "command slots" they occupy only one. There are also more serious heroes who fill two or three or four slots at once. The system, I must say, is controversial, but not devoid of meaning. Interestingly, in Versus Mode, the amount of space occupied by the characters can be chosen arbitrarily. In this case, a number of parameters are automatically adjusted. This approach, by the way, adds an additional strategic element to the two-player mode, and this is good news.
‹
›
Home
View web version