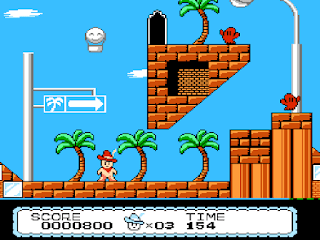 Genre: Action
Perspective: Side view
Gameplay: Platform
Published by: Information Global Service
Developed by: AIM
Released: 1991
Platform: Nintendo (NES)
Armadillo is a young guy from Texas who loves his girlfriend Sheryl, the coolest girl in the state. But one day a criminal gang kidnapped a girl, and it was time for the hero to appear. His name is Billy The Shell.
Using his gift to curl up into a strong and bouncing ball, he went in search of the leader of the gang in order to get even with him and return his beloved. The game is reminiscent of the super-famous "Super Mario Bros." in many ways, and it's not for nothing that there is a hack of this game called "Super Mario Bros IV".
The platformer we are considering is very good and not entirely standard. The physics of interaction with surfaces is well developed (in other words, the ball bounces off walls, floors and ceilings is very believable). You can navigate the level both in the form of a ball and in normal platform mode.
‹
›
Home
View web version